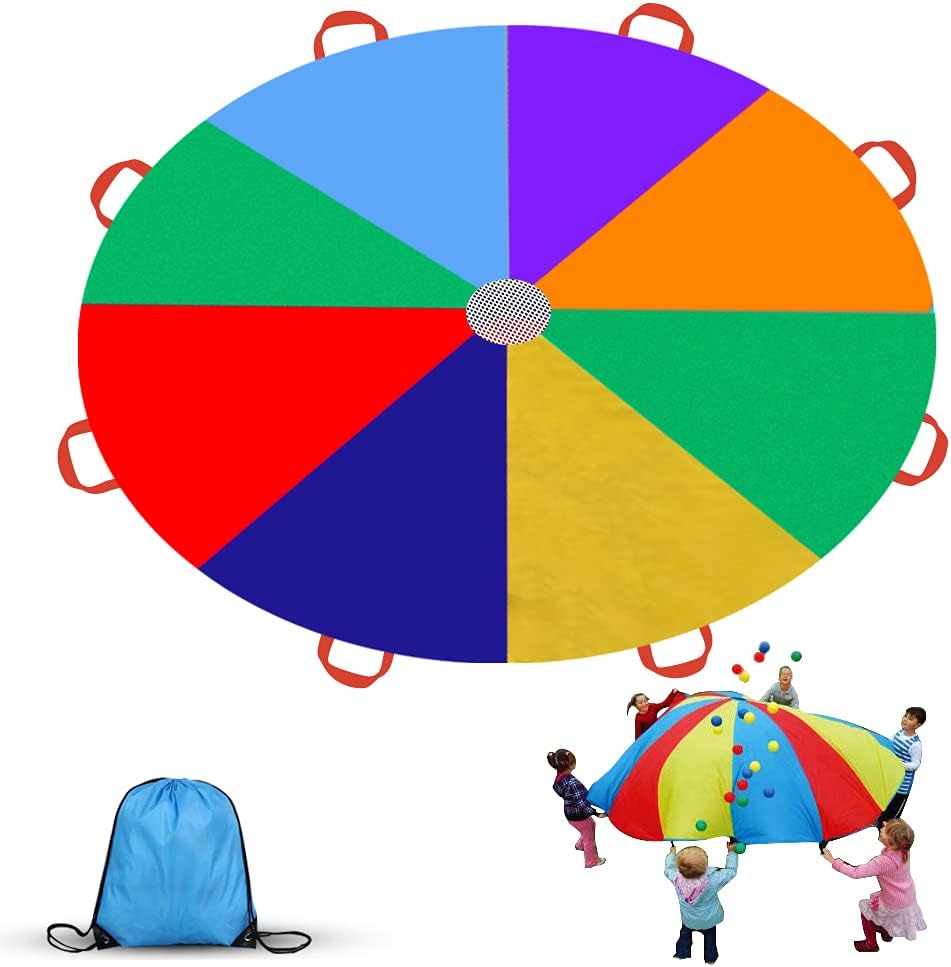 The period before the age of 7 is a key one for sensory integration learning. Children usually move around during the stage, looking for various sensory irritations. Therefore, they seldom think about problems. The period is one for their sensorimotor development. The acquisition of perceptive movement experiences via proper exercises during the stage will be greatly helpful for their future reading and writing, keeping stable emotions and sensory integration ability required for adapting to society.

MAKE WAVES -- While gripping the Kids parachute handle.Everyone moves their arms up and down to make Â small and large waves.

BALL ROLL- Children try to roll balls into the hold in the center of the play parachute.

CHUTE LIFE - children lift the parachuteÂ high over their head and the down again.

Listen to soft sounds and feeling the breezes that are created.

Move the parachuteÂ faster and notice the difference effects.

MUSHROOMS - From the standing position, children lift the parachuteÂ from the ground to overhead on the count of 4,Then all crouch quickly down.

A mushroom effect is created as the parachute settles.

PARACHUTEÂ TAG Lift the parachute high overhead, call one child's name and have him/her run (skip,hop,twirl or crawl) to the other side before the parachuteÂ comes down and tags him/her.

ONE HAND RUN - Each child holds the parachuteÂ with one hand.Extend your opposite arm out for balance.Run around in one direction, then change and run around in the other direction.A variation would be to use music as a cue to change direction.(i.e direction can be changed every time the music stops.)

PARACHUTEÂ RUN - Have the children take turns running one the parachuteÂ as it lies on the ground.white the other children make waves see how long the children can maneuver on the waves before falling down.(Each child's Â turns lasts the length of one song).

This vocabulary strategy helps kids puzzle out nuanced differences in the meaning of related words.

All About Pre-K: How to help our youngest children get ready to read! Articles, video, tip sheets, milestones and more.

Pinpoint the problem a struggling reader is having and discover ways to help.

Real questions from parents and educators, answered by experts.

Watch or listen to our classroom video, author interviews and more.

The newest educational games, activities and mobile apps, for kids PreK to grade 3.

"If you don’t like to read, you haven’t found the right book." —

Target the Problem!
Pinpoint the problem a struggling reader is having and how to help